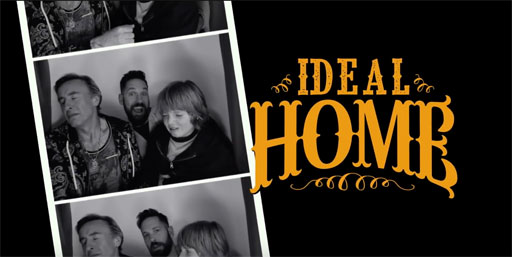 I knew nothing about this film. Never saw it marketed, which considering how marketable a name Paul Rudd is right now (Particularly because of Ant-Man) I found that puzzling. Almost like this film was one that was shuffled out embarrassingly by the studios. Add to the fact it’s a story about a gay couple, which is a story cinema still has issues with telling in some of the more oppressive and backward parts of the world (Iran, Saudi Arabia, America. Yeah I said it, come fight me bro), left me with a big cause for concern. I was particularly worried that this film would just be full of gay stereotypes, that the leads would be doing the kind of performance that is best left in the awful and horribly dark days of the 90’s. There are moments where Steve Coogan and Paul Rudd to go a bit too stereotypical, but those moments are fleeting, other than that the characters are pretty much just like every other character the two of them play. They actually have surprisingly good chemistry, to the point where I really want to see Steve Coogan in a Marvel film (him as a villain in the next Ant-Man movie would be incredible to see).

That’s not the only way this film subverts expectations. There’s not that much homophobia in it. It’s a film where a gay couple look after a troubled youth. It would be expected for there to be a moment where another character says “those guys are dirty fags” and the kid gets annoyed and punches them in defence of his new dads. The closest you get to that is another kid saying to him “you have two dads?” “I guess so”. There’s a moment where Steve Coogan visits his son in prison (the kid they’re looking after is his Grandson from his straight phase). It’s shown they have an incredibly strained relationship, and the son has a history of awful behaviour (drugs, stealing from prostitutes etc) and has a foul mouth. So when Coogan’s character says “Paul is my male companion, and has been for 10 years. Do you have a problem with that?”, you expect tension. But nope, the son just says “no” and that’s it. It’s beautiful how nothing that moment is.

This isn’t really a film about sexuality, it’s a film about parenting. And a pretty damn sweet one. I knew I was hooked when the kid was handed back to his dad, and the dad was drink driving and nearly falling asleep with the kid in the car. When that part happened I messaged someone “this film better not go where I think it’s going”. I was genuinely invested in these characters.

So I would recommend seeing this. Maybe don’t buy it on day of release, but if you get a chance to watch it, take it. You won’t regret it. I mean, it gave us this quote: