Happy Friday The 13th everyone! Now like all of you I’ll be celebrating this most holy of days by killing horny teenagers near a lake somewhere (lake, puddle, it’s all the same). But other people celebrate it differently. Since the days of Jesus fighting a Pterodactyl in the Roman Colosseum, some people have watched some of the Friday The 13th films on this day. So it makes logical sense that I should , celebrate this by blogging about it. But I’ve never seen any of the films so instead I’m going to talk about video game adaptations of films, because there was once a video game adaptation of the film, and do I need another reason?

Let’s get the obvious one out of the way. This is the first game everybody talks about when they talk of truly great video games. There’s not a word missing there, that should be “video games based on films”, that’s how good this game is. At the time I’d never watched a James Bond film, and even now I’ve seen one I still think he’s a prick, he’s a sociopathic monster who probably has so many STD’s that he should pretty much change his name to Mydia, Chlamydia. But despite that, I still love this game. It has not aged well however, but that’s mainly because of the lot of the things we found innovative in the game are now standard. Before this game it was normal for weapons and ammo etc just to be laying around, this made ammo collecting logical: you could only pick up what had been dropped by people you killed. Yes, there were a few bits of ammo laying around, but your main source of it was the people you killed. Then there’s the multiplayer. There are two types of people who played video games in the 90’s. Those who spent hours shooting their friends in the head in multiplayer and obeying the “no oddjobs” rule, and liars! Dirty stinking liars!

4. Hitchhikers Guide To The Galaxy 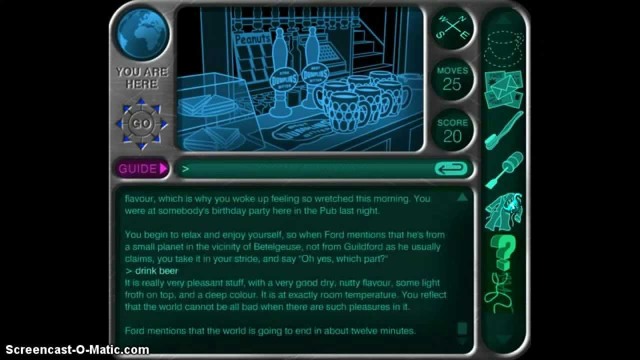 This game comes from a different time, whereas modern games help the player, sometimes with tutorials, sometimes with guidance during the game, and sometimes with just skipping parts of it if you find it too difficult. Gaming is now focused on enjoyment, making the player have fun (with a few notable exceptions). It wasn’t always the case, however. Some video games used to make you wonder what you had done to piss off the creators. The biggest genre for this were text adventure games. Games which by their nature were quite annoying: you could spend hours trying to talk to a character before you work out the exact phrasing needed (for example: “Talk to person” wouldn’t be accepted, but “converse with person” would). This game is fiendishly difficult, but also very funny. It will make you laugh, scream in anguish, and then hate yourself, a bit like having sex with a clown. I’m not exaggerating by the way, the game is available here if you don’t believe me. 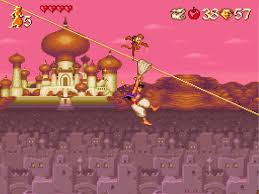 Oh, should have mentioned, I am not doing these in any particular order, otherwise there’s no way this would be higher than Goldeneye. But it is very very good. A 2D side scrolling platformer that stands out on a console which it seemed like almost every other game was a platform game. I don’t think people can appreciate how hard it must have been for a platform game to stand out in the early 90’s. You were competing against Mario and Sonic at their peaks. The Mario games had some of the best level design in video game history, easing you into an unforgiving game with innovative gameplay that filled you with wonder, whilst Sonic went “vroom” and moved quickly. So for a game to stand out it must be truly great, and this is. I would talk about why, but I already did it here so anything I’d say would just be repeating myself. So because anything I say would be repeating myself, and I don’t like repeating myself I won’t say anything more, because I don’t like repeating myself.

2. Scott Pilgrim Vs. The World

Because rarely has a video game of a film been so faithful in tone to the film. Anybody who has played video game versions of films and television shows know that the games can play fast and loose with the themes of the film. For example: there’s a Doctor Who game where you play as the famous pacifist, and go around shooting and killing everyone. In Scarface, crime totally pays, and the Fight Club game has Fred Durst. This game doesn’t suffer from that. It’s a throwback game based on a film which loves 80’s video games. It’s not just the film it uses for inspiration, the graphic novel has a scene where two characters get beaten at the same time and an achievement pops up, if you recreate this in the game, the same achievement pops up. It’s little touches like that which are missing from a lot of games.

This game is terrifying, it makes the Alien scary again, which it should be. It should be a fearful beast, it shouldn’t be something you can handle with a few shots from a pistol. This game makes you fear it, and that’s wonderful. You know how highly regarded this game is? It put faith back into the franchise after Colonial Marines, a game so bad someone attempted to sue the makers, and won. Whereas that game had you running around shooting aliens by the hundreds (and just made them into another enemy), this game only has the one alien, and you can’t kill it, all you can do is hide and survive. This is the survival horror game the latest generation has been waiting for. I am in no way saying that the genre is not good anymore, just that it’s mainly indie developers doing it now, you don’t have many major releases anymore (I mean, P.T got cancelled for f*cks sake), most of the franchises people used to turn to for the genre have now changed into more action games, so it’s good to see a game where you’re completely helpless, a game where (contrary to video game logic) exploration and discovery will probably kill you.

So yeah, that’s it. Hope you enjoyed it, and Fuck You Konami