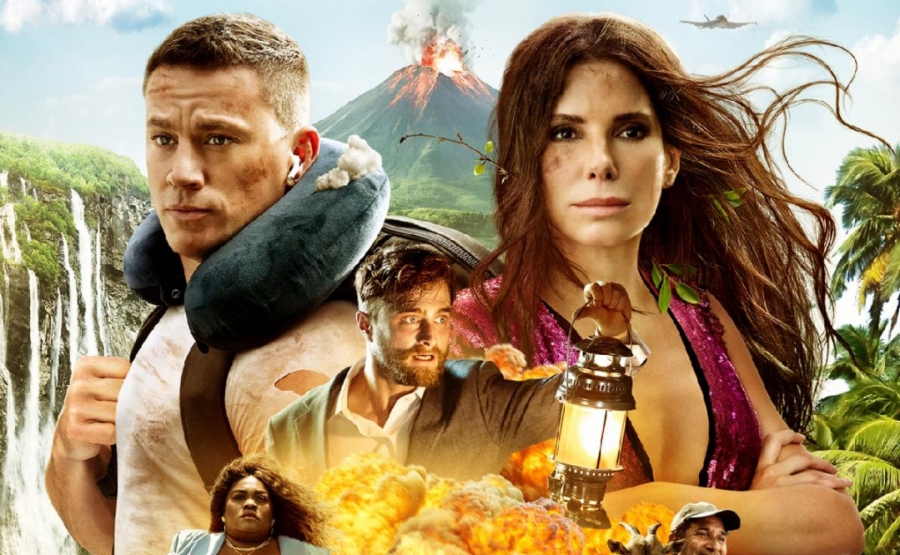 Quick Synopsis: While on tour promoting her new book, reclusive author Loretta (Sandra Bullock) gets kidnapped by an eccentric billionaire who hopes she can lead him to an ancient city’s lost treasure from her latest story. Alan, her cover model (Channing Tatum), wants to prove his worth to her so tries to rescue her.

This will not be the best film you see all year, but it is not bad. The plot is very predictable, you can guess pretty much everything that will happen from the trailer, you can probably even guess specific lines. But it’s also a lot of fun. It’s incredibly funny, with some amazing dialogue. Heard some of the biggest laughter of the year in this. It’s not aiming to be deep or make you sad, there’s nothing here that’s even approaching the island of tears. It’s not going to make you re-evaluate life or think differently. It’s not going to affect you emotionally. But it’s not supposed to. It’s supposed to be popcorn entertainment, and it does that very well. There are no moments where it feels too stupid (unlike Moonfall) in a way that takes you out of the film. There are a few moments where the backgrounds don’t quite mesh well enough in a way that seems believable. Side note: is it just me or is that happening more and more lately? Big budget films seem to have lost the ability to green screen in a way that seems real.

Other than that, visually it works too. There are no spectacular visuals or shots which will blow you away. The action scenes look good though, the directors are talented enough that even when there is a lot of stuff going on, you know exactly what is happening, who it is happening to, and where everybody is. There are no “wait, I didn’t see what happened there, the camera was moving too much” moments that plague films like Ambulance.

The performances are all fine too. Bullock is an acquired taste, she’s not someone who I’d see a movie because of, but she’s not someone I’d avoid. That opinion is probably because she primarily does really broad romantic comedies, and they can be very bland. But when she’s given a good script and character, her comedic chops really shine.

Tatum also does great. It’s strange to see him play someone so uncoordinated and unsure, but he pulls it off. When he does comedy, he does it very well (as has been shown in 21 and 22 Jump Street). He’d have made a great Drax in Guardians Of The Galaxy if they couldn’t get Batista. Daniel Radcliffe seems to be having a lot of fun, I think he’s at the stage in his career now where he’s just doing films for shits and giggles. His introductory scene contains a LARGE selection of cheeses, yet the only thing Radcliffe chews is the scenery, delightfully.

So in summary, you don’t need to rush out to see it, but it is worth a watch if you can. It’s just under 2 hours long, but I’ve yet to see a film fly by as quick as this one did. In summary, it’s not the greatest thing ever, but it’s a lot better than you expect it to be.