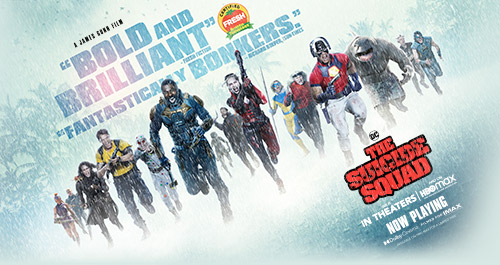 Quick Synopsis: A group of sociopaths get forced to team up to steal shit from an island. Chaos and hilarity ensues.

This was either going to be amazing or a complete mess. James Gunn managed to capture lightning in a bottle with Guardians Of The Galaxy, but that was a film with (lets be honest) not many people paying attention to it. There wasn’t really much expectations for it. This was the opposite, the critical failure of the last Suicide Squad movie meant that people were waiting for this. Some were waiting for it to fail, so they could continue to decry the DC Universe, they were waiting for the smallest mistake in the film so they could call it trash. Whereas some were the opposite, using anything positive to show that it’s an example of Gunn’s genius.

All I can say is that the first group will be disappointed. This is a brilliant film. It’s incredibly funny, brilliantly slick, and makes the most of the rating it’s been given, being gleefully violent. The violence is strange, it’s kind of horrific in parts, but it’s so out there that it’s weirdly comedic. This is best demonstrated in a scene where Peacemaker and Bloodsport walk through a village killing everybody in a “top this” competition with each other, the kills getting increasingly brutal and sadistic as they walk through the village. It’s disturbing and hilarious in equal measure, but it does a great job of selling you on these characters. It’s storytelling through violence, it actually tells you information. The reveal after this scene of who they killed is also hilarious.

There were early concerns that Idris Elba would be playing Deadshot, replacing Will Smith. I can see why that was thought, the characters are quite similar, and have similar motivations. They’re completely different in the actual films though. It helps that Elba is really good at what he does (but he does sometimes pick terrible movies), as is John Cena. They have great chemistry and make a great double act. It’s still weird seeing Cena swear so much when I normally know him as a squeaky clean hero to all, and I’m really looking forward to the Peacemaker spin-off. Actually the whole cast is wonderful, Daniela Melchior, in particular, is a real highlight and I look forward to seeing her do more stuff. David Dastmalchian is wonderfully neurotic in how he plays Polka-Dot man, taking a character who could be a joke and providing him with depth and tragedy. It really is all about Peacemaker and Bloodsport though.

I reviewed the original years ago, and wasn’t very complimentary. This one improves on it in every way. The performances are better, the story is better (albeit still quite simple), the relationships between the characters are better, and the use of music is much better. The original had an issue where it felt overloaded with music for musics sake. For this the music really suits it, and is placed far enough apart from each other that the film actually has moments of silence that allow you to breathe. There are a few characters returning and they’re all done better in this. Harley Quinn makes more sense, Waller seems more dangerous, and Rick Flag feels like a completely different character.

It also looks a lot better, it’s not as bright, but the colours are vivid enough that it’s a pleasure to actually sit and watch. Plus the actual geography of each scene is much better, even when there’s chaos going on you have a grasp of where everybody is in relation to each other.

Sadly, there is a chance this film may not be a huge financial success. It’s confusingly titled to casual viewers, who may be unsure if it’s a reboot, a sequel, or just a reimagining. It’s hard to tell exactly when this film took place too, as the events of Birds Of Prey are completely ignored. In fact, almost all the films before this are ignored. On the plus side that means it works as a standalone movie. On the downside, what was the point of investing time in previous movies then? Could you have not just thrown in a quick line to explain where Huntress etc are?

That’s a small issue though (as is the fact that they continue to make Harley Quinn herself severely overpowered to the point where it feels like she’s the most powerful being in the film). You will enjoy it, mostly. There’s one moment which you won’t; when The Thinker reveals the truth about project starfish. It’s completely horrifying, and one of the most disturbing moments in modern superhero cinema. Somehow it’s more disturbing than half the world dying in Avengers. It’s just so cold, calculating, and downright evil that it’s difficult to think of far too long without being utterly horrified. And it’s amazing. More superhero films should have the guts to go as horrific as this did. To provoke debate about human sacrifice and government policy.

So in summary, well worth seeing, at the cinema, possibly more than once.