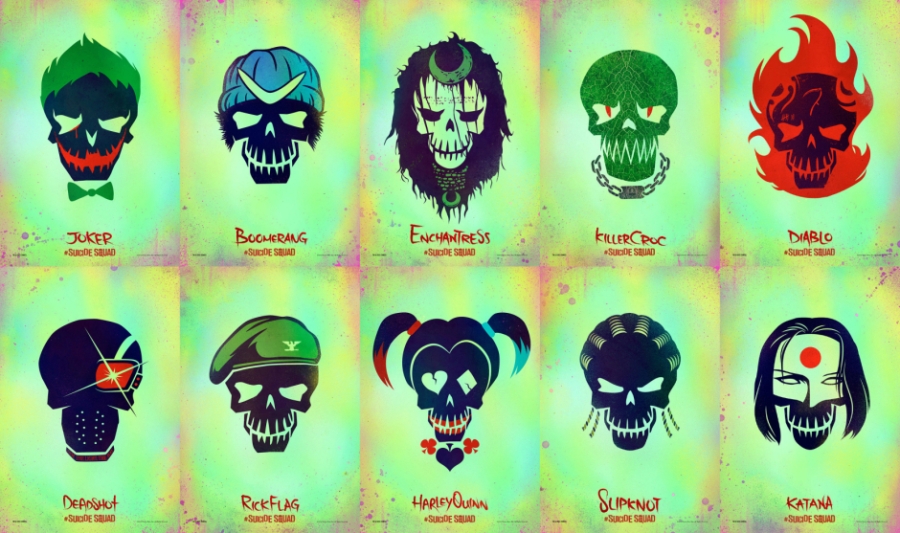 In a world where the colour palette of superhero films can mostly be described as Fifty Shades Of Grey (only much more painful) it’s refreshing to see such bright colours in a film such as this. Pinks and Greens are all over the place, it’s like a film taking place in a neon nightmare, and it’s brilliant. It gives the film a unique look, you can take a lot of still photos from this and know that it’s this film.

Shockingly, and I don’t think I’ve ever done this before, I’m going to have to praise Cara Delevingne, which is something I didn’t think I’d ever do for two reasons:

But her performance in the first half of this is superb. She plays the part of a woman who’s scared of her internal demons spectacularly. You really see her inner torment, and it’s just subtle enough to not be overbearing and too on the nose. She’s also involved in one of the visual highlights of the film when the thing inside her body starts to come out, and the hands wrap around each other, it’s simple but beautiful.It’s not just her though, Will Smith’s performance almost makes you forget about After Earth.

This is not an easy sell to casual theatre goers. The most well known characters in this film are Batman and The Joker, and they’re in it for a combined total of about 15 minutes. As such the film has to make sure the audience knows who the main characters are, which for an ensemble piece is not easy. Yet by the time the film ends you feel like you know the characters well enough that most of them have enough background that a solo film wouldn’t be out of the question. Special mention must go to El Diablo, as played by Jay Hernandez. He’s the only character I didn’t really know anything about, I knew about Harley Quinn from various Batman comics, Deadshot from video games etc. Yet his character is really smartly set up, his reluctance to fight makes complete sense  considering his back story. His character is one with real emotion and heart.

Iron Man changed the game when it came to music in superhero movies, when they used AC/DC it set a new standard for the genre; no longer could they slack off in the music department, they needed popular rock songs by established bands, and a few classic rock songs in their too. This was perfected in Guardians Of The Galaxy, which had one of the best soundtracks of 2014. This film continues in that tradition, with songs from Black Sabbath, AC/DC, The Animals, CCR littered throughout the film.

Everything I mentioned on the plus side? They all come with caveats. The still shots look fantastic, but the way it’s edited? Holy hell do they make some of the most basic editing mistakes ever. The shots are not given enough time to leave an impact, there’s quick cuts between different things in scenes which should be slow paced. Whilst Cara Delevingne performance in the first half is awesome, the second half is awful. She seemingly forgets the meaning of “subtlety”, and she does a weird thing with her body that makes her seem like a wooden marionette. The characters bond and start talking about being like “a family” without any reason or bonding moment. Whilst El Diablo’s sacrifice (oh, spoilers), was noble, it made no sense, it would be like you sacrificing your life for your classmates on the first day. Yes there is a lot of good music, but there’s also A LOT of music. There’s so many moments where you sit there thinking “jesus, another f*cking song? We get it, you’ve got an impressive record collection. How about actually working out how to match the music to the scenes?” The Joker is good? Shame he’s only in it for about 10 minutes. Now I’ve seen people complain about people complaining about this. Saying things like “you could tell he was only going to be in it for an extended cameo”. Really? Tell the advertising campaign which was HEAVILY focused around him, or even the posters which had Jared Leto as the second billed actor. He was billed higher than almost all of the main characters. Now, if you were following press releases etc then yes, you knew he wasn’t going to be in it for long. But the majority of cinema goers aren’t people who spend all the time online looking for details about this film, they’re people who see the trailer, see the poster, and decide to see it.

And that, ultimately is the biggest problem, it’s hard to say something nice about this film without having to quantify it. And as with most modern films, the plotting is all over the place. The opening half hour is nothing but blatant character building, with someone sitting there literally telling you about the characters. There are way too many shots of Harley Quinn that are blatant fan-service (and a scene where an entire group of people manages to climb stairs quicker than a lift travels up 5 flights). That, added to the length equals a film which, despite being almost sold out when I went to see it, had nobody stay through the credits. The second the closing credits started,everyone left, and with a film like this that shouldn’t be the case, and it’s disappointing that it is

If you go cinema a lot, go see it. If you only go to the cinema a few times a year, and going is a true event, then don’t make this one of your visits.