I was actually excited about this. The idea of a group of people getting what they wish for but it leading to their destruction is perfect for a horror movie. Think about it, since there’s really no limits you get to showcase some incredible set-pieces full of imagination. You can use the characters wishes to display who they are as people. Plus the whole “be careful what you wish for” allows for some creative scripting as well, the idea of your dreams being cursed or not up to what you expected. That’s definitely not the case. The script is formulaic, as is the direction and performances. I’m mainly annoyed by two things, two major issues I had with the film:

I’ll go into them in further depth. The first one: the way the wishes end up causing deaths is not really linked to the wishes themselves, there’s no sense of clever Twilight Zone/Black Mirror karma going back to get you kind of thing. I’ll go through them here:

She wants to torture someone she went to school with.

It turns out it’s not a hologram and she is actually torturing her. I’m going to go into this specific moment in more detail later on. It then gets darker as she breaks the woman free and they end up getting chased by the torturer. So it just becomes a standard slasher film.

Simple; have Melanie kill her but then realise that revenge doesn’t fix everything and she’s haunted by the memory of what she did. When she tries to sleep at night all she can think of is what she did. 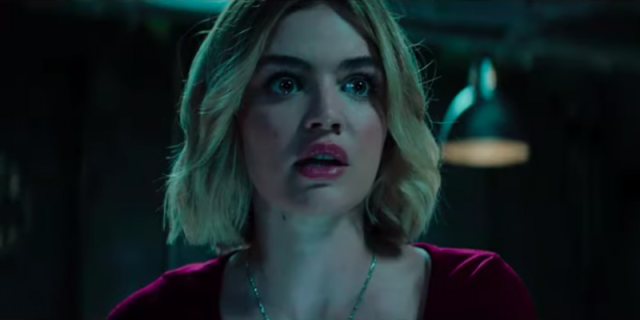 “having it all” Basically a massive party at a big house

This could have been the most interesting. All they needed to do was show the toll that lifestyle takes. Basically have them trapped in a never-ending party, forever. No sleep, no rest, no escape. Every time they go to leave the building they’re transported back in, every time they sit down they get forced to join a conga line. Show lots of asshole strangers there who refuse to leave the party.

To accept a marriage proposal she rejected years ago.

Okay this is where the film gets weird. She gets exactly what she wanted but realises that her new life with her now-husband and daughter doesn’t actually belong to her and she has memories which aren’t hers. Interesting concept for a horror movie, right? This was done magnificently in Happy Death Day 2 U, in this it lasts a few minutes and then she changes her mind and asks to go back to a hotel fire she caused. Now she’s there again she changes the past by………she doesn’t. The fire still happens. It’s very important to the plot though as she sees everybody else from the island (minus Melanie) there on the night of the fire. So really this only happens for plot reasons.

Have you seen The Butterfly Effect? Make it that. Show how her decision would have impacted her life; have it mean she failed in her career etc. Basically, have her first wish matter.

The army think he’s pretending to be a soldier and hold him hostage. This section actually provided the strongest moments of the film, he’s transported to the past when his dad was alive and meets him. There are some great emotional moments where his dad realises what’s happened and they have a great reunion and talk about how his dad died saving his troop. Patrick ends up disappointed when his dad goes to leave as he doesn’t want to go on the next mission because (as Patrick told him) it leads to his death. “but you dying saved your men, that’s why I thought you were a hero, you have to go do it” is essentially Patricks argument. An argument which makes no sense, the only reason he died is because he walks into an ambush he wasn’t prepared for, he’s prepared now, so can tell his men to avoid the ambush. His dad ends up dying anyway when they walk into the house where the aforementioned party is going on (in the present, and no they don’t mention the time discrepancies, the closest you get to it is “oooo magic island water”).

Keep the “transported back in time to see his dad” part, that part works. But change it so it is his dad’s final mission, and he didn’t actually die saving his men in an ambush. He was part of a top-secret mission to attack something non-human; so a demon, a monster etc. Basically, turn it into a monster war movie (similar to Predator). Ordinarily, I would have gone with “show how his dad was not really a hero and instead killed lots of innocent people”, but the emotional moment of the film is the only part that worked, so it needs to stay.

There you go, it’s fixed. Now what you have is more like an anthology film, with each section having a different tone, with different scares, albeit ones which merge together well. Now onto the ending. The ending twist was that the whole thing was actually Melanie’s wish, and she wanted them all to die because she blames them for her not-boyfriend dying in a fire; Patrick because he didn’t rush in and save them, JD and Brax because they were friends with him and didn’t check he had left the room before they left the hotel, and Gwen because she started the fire. This would have worked if we didn’t see Melanie early on act really confused by the fact the powers of the island were real and she didn’t realise the woman she was torturing wasn’t a hologram. But if she was behind it all, then she knew all the time what was actually happening. So why was she pretending? She was alone in the room so the only people who were watching her were the audience. It was like the ending was written by somebody who hadn’t read the rest of the script. It makes ZERO sense and completely kills the small amount of goodwill I had towards this film. It wasn’t even needed, just play the film straight and let it scare people, not everything needs a twist. If you must have a twist, make it a different way. Cut out the fire sub-plot completely. Yes, if you had them all die and this was hell it would have been obvious, but it would have made sense.

So in response; avoid this movie. I can see 2020 having worse films than this, but I can’t imagine I’m going to see one that wastes its potential as most as this. It’s truly awful, not even worth a netflix watch.