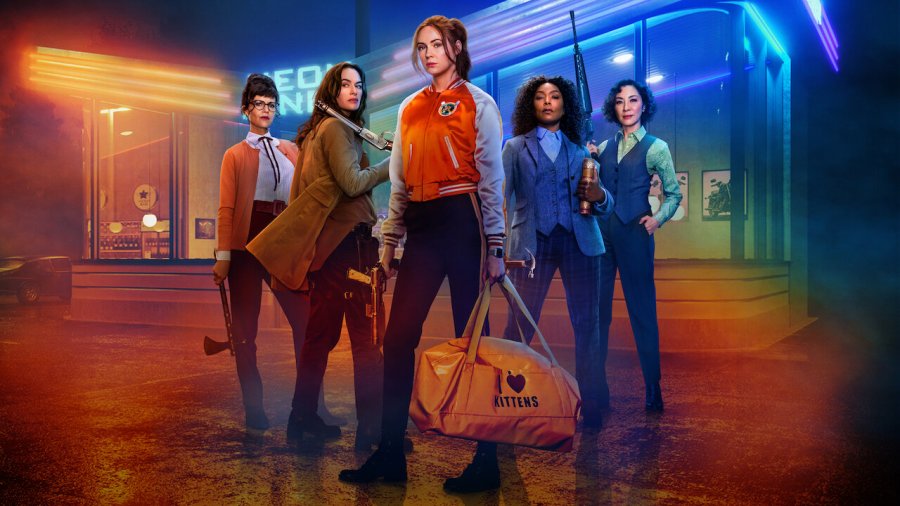 Quick synopsis: A young hitwoman (Karen Gillan) has to team up with her estranged mother (Lena Headey) to save a young girl from assassins.

Confession time, I used to be an idiot (hah! “used to”), I remember when I was around 5 years old and hearing about film directors, and I couldn’t see the big deal. “all they do is point the camera at the people talking, what’s so hard and important about that?”. First off, with thoughts like that, it’s no surprise I later enjoyed the work of Kevin Smith. Secondly, I could not have been more wrong, it would be like saying “what’s so hard about writing? It’s just rearranging 26 letters”. It’s the choices that define a director, a good one makes a film coherent and special, bringing their own unique style to it. A great one blows you away with the creative decisions. I’m talking about someone like Edgar Wright, who has his own definitive look and feel.

So obviously it has its imitators, and this feels like one of them. I’m not that familiar with the work of Navot Papushado and even after watching this film I’m still not that sure. Whenever you watch it you can’t help but wonder what Wright would have done with it. Even someone like Snyder would have been interesting to see. The ultra slick action sequences, the stylised look, and the general world-building and sense that it’s an adaptation makes it feel much closer to John Wick though. That’s a huge downside for the film, as being compared to John Wick will make everything seem worse by comparison.

That’s a shame as it’s a real fun film. Everybody is giving it their all, and if you’re looking for a film to sit back with in a group of friends and kill time, you won’t go wrong with this. It’s just……..it should be better. It’s not quite slick enough to get by on being as brainless as it is. In a world of John Wicks, this just isn’t good enough to stand alongside. There’s also an issue with characters. I can’t quite put my finger on it, but this feels like it was definitely shot with the male gaze in mind. It’s made a mistake a lot of similar films made, where “strong female characters” just means “they wear good looking clothes and can fight”, they don’t have agency or enough characterisation to get them through. They’re PHYSICALLY strong characters, but narratively and creatively they’re still weaker than any character in a 70s exploitation film.

This is not helped by the inconsistent look. The fight scenes are over edited to the point that some of them feel like bad marvel fight scenes. The sound also isn’t great. Some of the hits are muffled so the hits don’t land quite as hard as they should. As an example there’s a scene where she bowls a bowling ball at someones head and it hits with a dull and cushioned thud. So you don’t know whether it killed them, knocked them out, or just injured them. With the right editing that could have been clearer.

It’s not the only scene which isn’t as good as it could be. There’s a fight later on where she doesn’t have use of her arms. It’s a really good scene, but it should be great. It’s a solid 7/10 when it has potential to be the highlight of the year. It feels like the filmmakers felt hampered by the restrictions, instead of being excited by the opportunity to creatively think of the new set pieces it allows them to have.

In summary I think this is a case of right film, wrong time. I would have loved to have watched this in the 90s. The music is great, the performances are good and it is in general a lot of fun to watch. It has a really distinct colour scheme and is pure joy to watch. It’s just……as an audience member, I want more.