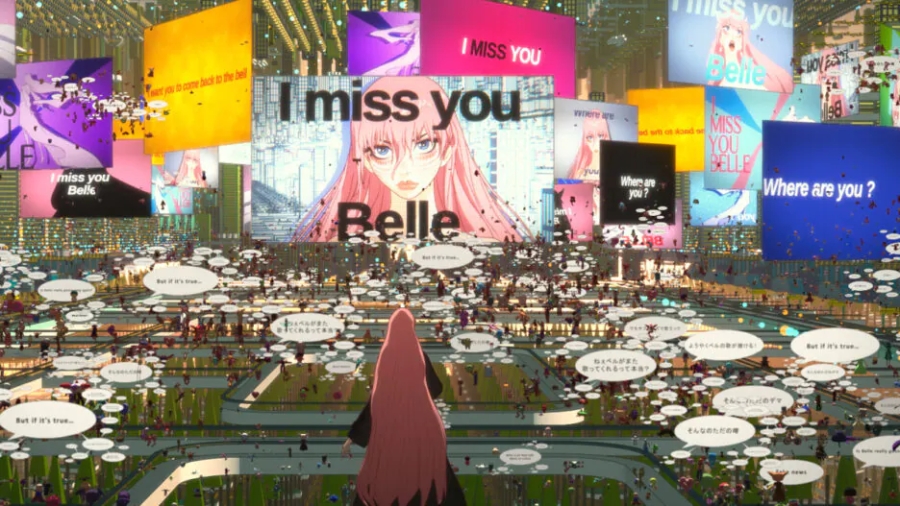 Quick Synopsis: An adaptation of Beauty And The Beast, with VR, social media, and kayaks.

I love my local cinema, I really do, I encourage everybody to go see films at the cinema if they can. But they do sometimes annoy me. There have been multiple times where they’ve shown posters and trailers for films they then don’t screen: Popstar, The French Dispatch etc. So I suppose I should be glad that they at least showed this, once, at 7:45 on a weekday.

Now that I’ve seen it, I’m no longer annoyed by this, I’m f*cking pissed. This is astounding, and I hate that I left the cinema, text people how great it was, and yet they are unable to watch it like I did. This deserves to be watched. It’s probably the best film I’ve seen so far this year, not my favourite, but definitely the best. The emotion, the music, the story, the animation, it’s all so wonderful.

It is an adaptation of Beauty And The Beast, but a very loose one. It uses it as a foundation, but then takes it in a new direction. It’s like the original is a stick figure of a person, and this is a Picasso. You can see the similarities, but you wouldn’t recommend it to fans of the original.

You may be forgiven for thinking this goes a bit silly and light. That would be wrong, it goes dark. The revelation that the “beast” is a teenager who’s being beaten by his father, and the moments where he is hunched over and shaking are when he’s protecting his younger brother are heartbreaking. As are when the dad approaches the main character and attacks her in public.

The music is FANTASTIC too, wasn’t in English (obviously) but the melodies are terrific and haunting. There’s a weird ethereal beauty to it, like a fog made of reassurance and kind words. Definitely the best soundtrack of this year, not exactly the kind of songs you’ll listen to on their own individually, but definitely the kind where you’d sit down and listen to the whole soundtrack on your headphones.

The animation? It’s strange, some may hate it, some will love it. There are moments where it’s a bit “off”, but when you remember that those scenes are taking place in a virtual reality world it all makes sense that the buildings would have that weird feeling to them. There are moments where it feels like the backgrounds to some scenes are photos, and it’s certainly an acquired taste, but it’s one I like. The director, Mamuro Hosoda, also directed Wolf Children, and The Girl Who Lept Through Time, both of which have been highly recommended to me by multiple people.

So in summary, you have to see this. It could have been a cliche romance, instead, it’s a heartbreaking tale of online identity, systemic abuse, PTSD, art as therapy, plus it doesn’t end with a romance. There’s no “she loves him” ending, it has a “she loves herself” ending. Much more beautiful. I already know I’m going to buy it, I have to see it again. Have you ever been at a gig and there’s a moment where the singer stops singing, the band stops playing, and people stop cheering? In that moment where the only sound is thousands of people singing in unison? The mass emotion and passion seem to carry everybody today to a better place? Sure, life is shit, but at that moment, everybody belongs, everybody is as one, and it’s glorious. That’s what this film is like. Stunning, beautiful, and an experience you’ll carry with you.