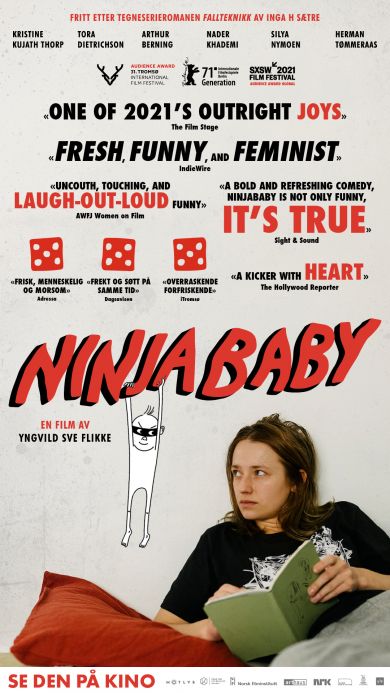 Quick Synopsis: Rakel is shocked to find out that she’s 6 and a half months pregnant in this strange but wonderful Norwegian comedy drama.

Try to think of what film this could be based on that title. It’s actually a strange coming-of-age drama. The closest I’ve seen to it would be Juno, but tonally it’s different. That was quite twee and cute, this has more of a punk and comic-book energy. If they were people, Juno would sit there and read Jean-Paul Sartre, Ninjababy would be reading Persepolis.

Everything about it works well. Almost, the music seems a little wrong. I kind of want to watch this in Norway as it feels like the music was changed for the international release to be a bit more commercial. There are some moments where it works, but otherwise, it just seems like “generic pop song #52” over the soundtrack.

Kristine Thorp is wonderful in the lead role. It helps that she’s incredibly well written. It would be easy to make this character unlikeable. To have the audience reaction be “ffs just sort your life out for once” and think of her as someone who put herself in the situation by being irresponsible. She’s written well enough that you are with her every step of the way. Helped by her performance too, her facial expressions when she finds out she was 6 months pregnant, not 8 weeks, is devastating. She looks terrified, responding “take those fucking pills and shove them up the pill hole”. I have never seen Thorp in anything before, but has some of the best visual acting I’ve seen in a long time. At times cartoonish and exaggerated, at times subtle and realistic. She’s perfect for this, and without her this film would not have the heart that it does.

You wouldn’t expect a scene of someone shouting “Blood and suffering!” would be as heartwarming as it is when it’s done in this. I have no way of leading into that sentence, and no way of coming out of it, but I felt it needed mentioning.