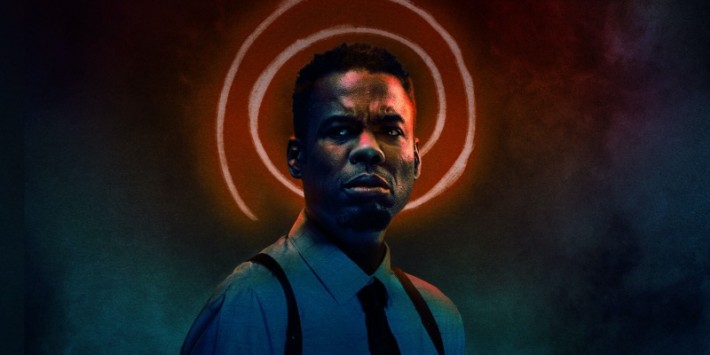 Well this is interesting. It’s a horror movie, specifically a Saw movie, starring Chris Rock. I wouldn’t necessarily say I was excited by this film, but I was curious. I thought at worst it would just be a train wreck, like it would go too Chris Rock and be way too comedic. Thankfully it keeps the comedy away from the horror, you don’t often get characters making jokes in the presence of a dead body, for example. There are still a few too many comedic lines though, and they do detract away from the movies tone. They’re the typical Chris Rock jokes too, him calling other cops motherfuckers and insinuating they’re idiots. Those moments don’t suit the style of the film, they’re more like a buddy cop film, which would have worked if more of the film was like that. It’s like it’s trying to be both a buddy cop film and a horror and that mix of genres doesn’t really work.

It’s not helped by the run-time. Usually I complain about films being too long, but this is the opposite. This is supposed to be an atmospheric horror, and those require long scenes of build up, then a payoff. I mentioned earlier it has shades of a buddy cop movie, and those require the following scenes:

Those scenes can’t be done in less than a minute, they all require set ups and pay-offs. And they’re very dialogue heavy so again, take a while. Having both genres and trying to do them in a 93 minute movie is a recipe for disaster. Well, maybe disaster is a bit harsh, it’s not an entirely unpleasant viewing experience, it’s just a bit pedestrian. Not the traps though, the traps are wonderful. By which I mean they’re horrific in the best possible way. So when the movie is actually a Saw movie, it works. When it’s not? It’s kind of dull. Saw movies are can be heavily criticised (and for good reason) but they’re never usually dull. Also, they’re never normally as predictable as this one is. If you’ve seen a film before, you can probably guess the ending. You know it has to be a character the film has already introduced, and there’s really only one (at a stretch, two) characters it could be, REALLY weak plotting. Also, his fake voice is fucking weak. It doesn’t feel like a voice that’s going to inspire fear, it feels more like a voice that’s going to tell it’s mother to go get more hot pockets and mountain dew, and no mom I can’t pause the game I hate you I wish I’d never been born *flounces out room*.

Other examples of weak script: there are a lot of moments where unless something happened EXACTLY as it happens in the movie, nothing would have happened. Okay, admittedly that’s something which has been the case for a lot of the films, a lot of the time, if someone moved ever so slightly to the left, everything would have been avoided. It makes you realise you’re not in reality, but watching a movie, something which is definitely the case with this movie. I’m going to spoil the ending of this movie in the next paragraph btw.

So at the end, Chris Rocks dad (Samuel L Jackson) gets kidnapped by the killer, the police move into the building, his arm gets raised in a mechanical contraption, so the police shoot him. Meanwhile, the killer walks away using the service lift. The film ends there. Now, all it would have taken is for the police to realise that the person they’re shooting was clearly not in control of his limbs, or for Chris Rock to tell them that and just get them to take a step to the left and avoid getting shot (it was all automatic so the path was fixed, the arm wouldn’t have been able to be moved from left to right). Plus, unless EVERY police officer went into the building, there are going to be some outside, ready to catch the guy as soon as he steps out of the lift. Shit, they could probably see him from outside the window as he made his escape.

On the plus side, as I side, the traps are great, the story itself is probably one of the best in the series (just weakly told), and the performances are what they need to be (the “jigsaw” voice being the obvious weakest part). It also looks pretty damn good, it has a summer feeling to it that the others lack. The others felt almost entirely about the killings, but this one at the very least seems as though the city is a real breathing entity full of untold stories. It feels more fleshed out than the actual characters.

There’s definitely potential here, it’s just let down by the pacing and the tonal shifts. Oh, I bingewatched Taskmaster before this, which created a very strange mash-up in my head. I’m not saying this film would have been improved by having a seven-foot tall British comedian routinely insulting everybody, but, well actually it would.