Valentine’s Day is this week, which means we’re only a few days away from the best day of the year; 15th February, otherwise known as “Reduced Chocolate Day”. So with that in mind here’s my five favourite romances from sitcoms (you probably could have guessed that from the title). 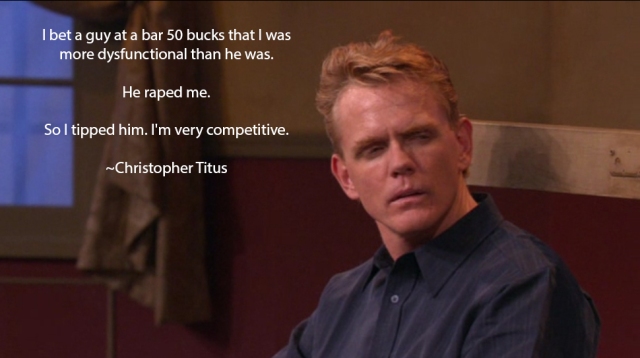 Holy hell some of this was hard to watch, not in a “this is awkward”, or “this is terrible” way, but in a “this is so brutal and honest”. It’s a relationship on screen where one of the first defining moments is them cheating on each other, the two of them realised that they are both so screwed up, so full of neurosis and anger, that they are perfect for each other. Based on the relationship of the lead writer/actor Christopher Titus, he’s not ashamed to put everything out there, to say that during relationships you’re going to hate each other at times, but it will all work out in the end.

Except that’s not the case. I mean, it is in the show, but not in real life. In real life his wife cheated on him, lied to the courts and said that he beat her and their children in an attempt to get custody of their children, then divorced him, leaving him more messed up than he already was. That knowledge makes it REALLY hard to watch this show at times, you know that every time the character (and by extension, the writer) is gushing about how fantastic she is, and how much he loves her, you now how it ends. It’s heartbreaking and emotionally devastating,

This  blog originally ended with “finally did something I never thought possible. I went an entire sitcom-based blog without once mentioning Crazy Ex Girlfriend.” then I would put a picture of a quote from it, then “damn”. But whilst looking for a quote I found this: 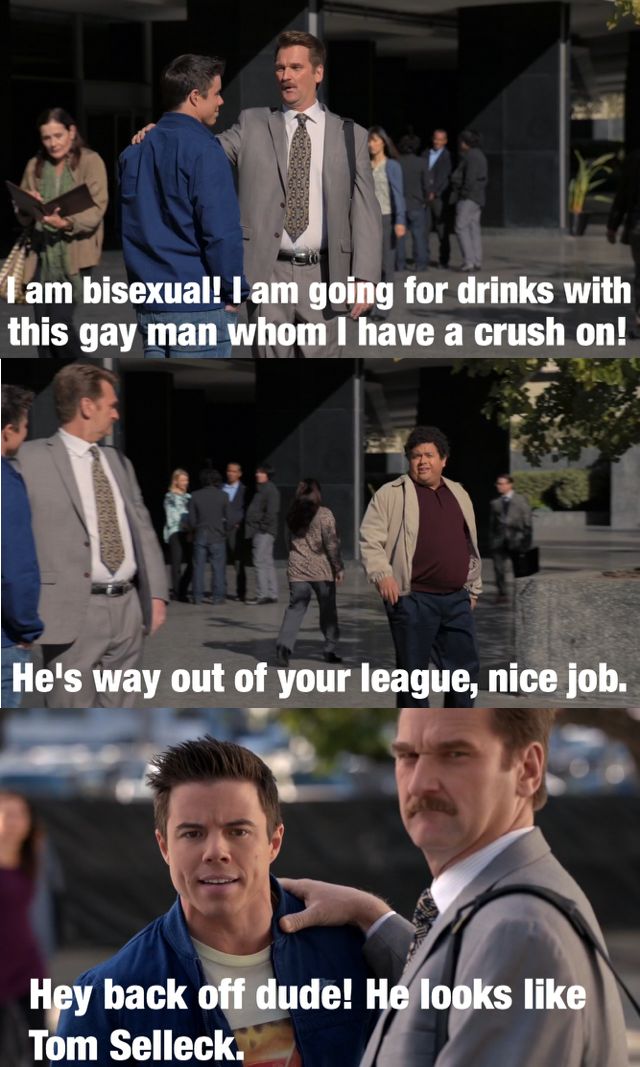 How could I forget this? It’s not the main relationship of the show, but it’s definitely the best in terms of how happy it makes the characters. The way this started was a masterclass in how to set up a relationship in sitcom. There was one or two small moments between the two characters, and the moments were very very small, like “could easily be ignored or never referenced again as it was a one-off joke” thing. There was then nothing for a few episodes. In that time the audience started writing fan fiction about the two characters, and making comments on youtube videos saying how cute a couple they’d make. Then eventually Darryl admitted to himself that he was bisexual, and they’ve been together ever since, and because of the way it was built up the fandom rejoiced as it seemed like they had made it happen. They’re supportive of each other, different enough so that they retain their own personalities/provide balance, and it’s not one sided at all, you can see why both of them are into each other. They’re just so adorable together, it’s perfect.

A sitcom that admitted from the outset that it was about a romance, which was kind of risky as if the central relationship didn’t work, then the entire sitcom would fail. Luckily the couple worked, and we got to chart the entire course of the relationship through the show. One of the best things about this show is also kind of annoying; it’s only three series. I do wish there was more, but I realise that new series would be a bit pointless, the story has been told. It’s like they had a definite end point and the entire series was building towards that, so adding any extra would feel less essential, unless they had a story they were desperate to tell.

2. Marshall and Lily – How I Met Your Mother

A very very honest relationship. Despite being one of the most perfect couples in television from the last few years, these two do argue, a lot, and not just silly arguments. They are angry, hate-filled and deeply personal arguments. Yet apart from a few moments, you never feel they’re going to split. You somehow know deep down that no matter what they do, they’ll stay strong and will stay together.

So adorable and perfect for each other. Even a bitter cynic such as myself can’t help but feel slightly warm inside at the way these two interact. The key to this relationship; John Krasinski and Jenna Fischer. The actors behind the characters do so much to make it work. There’s subtle nuances to the things they do, little looks they give each other etc mean that they don’t look like two actors playing a couple, they look like a genuine couple, the two share an innate warmness that radiates from them and is a testament to sitcom romances. There are some people who believe that once they got together their relationship suffered and they became insufferable, these people are wrong. Jim and Pam for life!

So there’s that done. And happy chocolate day everyone.