Couldn’t think about what to write this week, so here’s a list!

I’ll admit this is probably a bit more of a guilty pleasure at this point. It wasn’t always, but I haven’t seen it in a while, so it’s here based mainly on my fond memories of it. So up front, the set-up is typical silly as hell anime. A very shy fifteen year old high schooler who’s really eighteen because he was in a coma for three years, has to marry his secret alien homeroom teacher to stop her from getting fired…You got that. Good. Because after that really overdone set-up, the

show turns into one of the most charming romances I’ve ever seen.   The developing romance between the high schooler and his teacher (just go with it, it’s Japan) is the beating heart of the series. And fantastical funny alien shenanigans aside; it’s a surprisingly earnest and sweet, if a tad melodramatic romance, and is one of the rare anime about the hurdles of a couple being together, instead of just getting together. The development of their characters through their relationship is well paced and full of

genuine moments of tender love and charm, and if you can get past the initial silliness of it all, you’ll find a show of fun diverse characters and more heart than it knows what to do with.

This is here, half for nostalgic affection for the series left over from my youth, and half as a legitimately awesome science fiction revamp of the adventure series. Digimon Tamers is an odd ball even in the Digimon shows, being outside the continuity of the others; it is instead set in a world where those shows exist as shows, and the Digitalworld in this series is a dangerous man made universe, vastly out of its creator’s control. It still follows the tried and true formula of kids get monster friends and fighting to save the world, but unlike the other shows, one, it deals with a smaller more nuanced cast of characters who feel like real kids, far outside the stereotypes of other seasons. And two, it is honestly way darker than a kids show should be. From the mind of the man who would bring us Serial Experiments Lain, and Ghost Hound (if you don’t know those shows just trust me, they are some freaky shit), his is a Digimon far removed from the happy go lucky world of its predecessors.

This is a Digiworld where people die, children’s lives are in danger, and they do not all make it out okay. Now it’s not really all as gruesome as I just made it sound, it’s still a kid’s show. There is still plenty of humor, good natured adventure, and silly Digimon antics throughout the show…..okay in the first half before the shit hits the digifan, and I understand how that would put off any new older watchers who find it too childish. But I find the contrast of how light it starts (though even when it’s light the undercurrent of darkness is still very present) and how far down it goes into the depth of our heroes hearts, as they experience pain, loss,

and having to shoulder saving the world, worth sitting through childish stuff for. I’ve always liked stories that start sweet and childlike but are then brought in to dark realizations, like Grimm fairy-tales. Which when I put it like that, I just realized how similar it is to the next show on this list. 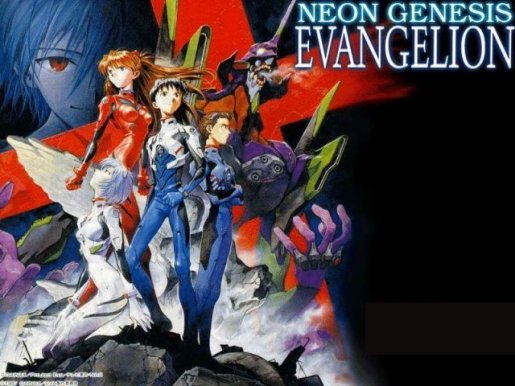 Now this is a big one. One of the bench marks of modern anime…that a lot of people really don’t like anymore. At least that’s the vibe I’ve gotten. Having only watched the show many years after getting into anime, I first heard it was the end all be all of anime… then I heard it was actually hugely overrated, way way up itself and pretentious, and the lead character was a whiny sack of shit. So going in with that much anti-hype

surrounding it and my expectations low, I really ended up loving the shit out of the show. Though I can see the faults, they are nowhere near the extreme the internet seems to think they are. Shinji isn’t as annoying as people say, he’s just a teenager.
So for those who don’t know, the show is a bit of a deconstruction of mecha anime, so it’s about teenagers piloting giant robots to save the world. You know like Power Rangers. But what set it apart from the literal hundreds of other mecha anime, was how fighting life or death battles with giant monsters on almost a daily bases actually had

ramifications on the pilots state of being. Rich with psychologically warped characters, philosophical undertones, themes of lost innocents and human existence, gorges but violent as hell fight scenes, and a butt load of abstract imagery; this is a far cry from “teenagers with attitude” who stay good natured social butterflies between bouts. Being so near death, under the stress of world saving, and on top of just being a teenager, takes its toll on everyone; mentally tearing them down fight after fight, till you completely sympathise when they have break downs, question the point of existence, and want to just run away.

One thing I do have against the show is its plotting near the end, where everything just seems to happen way to quick; really important new characters are introduced and given almost no time to develop before the plot uses them, and ending itself does get a bit too abstract even for me. So I recommend watching the show then watching the movie The End of Evangelion. It redoes the ending, so that not only do the character’s arcs finish (though it does take them in different directions), but the plot actually ends too. Still not a straight forward ending, but there’s at least a bit more to it.

And it has one of the best openings ever!

7- Anohana: The Flower We Saw That Day 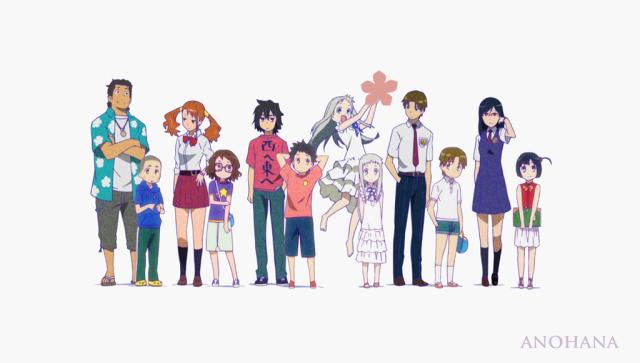 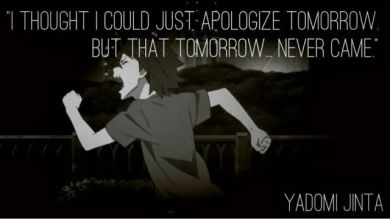 I’ve always liked stories based around old friends getting together years later, and seeing how they’ve changed. And I’ve also always liked mature looks at how people deal with hard emotions, like grief and loss. Both those things are at the core of this series. Five teenagers who grew apart after the death of their friend when they were children, slowly come back together after the washed-up leader of the group starts being haunted by her ghost, who only he can see. So as they start to work together to find a way to help the ghost pass on, they

begin to gradually reconnect and have to finally face their feelings of loss and grief they have for her death and each other. If that description didn’t give it away, this is a very emotional series. It may be too overly sentimental for some, but with its likeable well developed cast, and its balls not shy away from the darker, psychological ramifications of losing a loved one, it’s a tearjerker that earns every tear. On top of that it taps into that childlike wonder only animation can, and will make you ache for those nostalgic days of playing

with friends you don’t see anymore. Beautifully animated and paced, and with enough laughs and charm to keep you engaged all the way through; I’ve always had a soft spot for animation that can make me cry, and AnoHana hits that spot and is razor sharp. 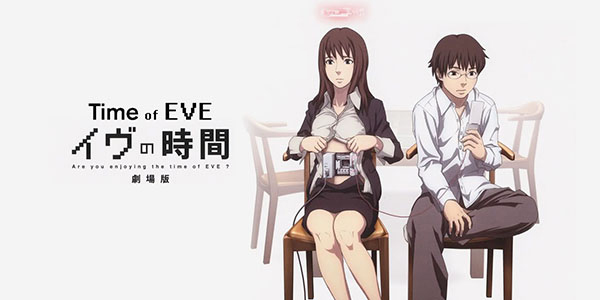 Though only a 6 episode web mini-series, Time of Eve is one of the best pieces of science fiction I’ve ever seen. In a future where robots are near perfect human replicants and everyone has one as a servant like the latest

iPad; the show is predominantly set in the titular café that does not and will not distinguish between humans and machine. Following two teenagers who start frequenting the café because of their own deep seeded issues with robots, each episode explores the boys getting to know the other patrons of the café, be them robots or humans, and in small ways they slowly discover how little that matters. Though the idea of robots with humanity and what

makes us human are not a new idea, this show finds much smaller, nuanced ways to discuss it than I’ve seen before. There’s no big revolution, no robots fighting for their rights to party (though that is kinda background plot), it’s a character driven tale, where we’re introduced and learn about these people before discovering which they are, the answer usually being as heart-breaking as it is fascinating. At its heart the show is about humanity and prejudice; how we can only be human if you choose

to be, and the lead characters learning to move past their fear of self-aware machines.

Though all the episodes have been edited into a feature length film, I still recommend watching it as a series, as the pacing works much better that way.

Come again next week for my 5-1 and some Honourable mentions.