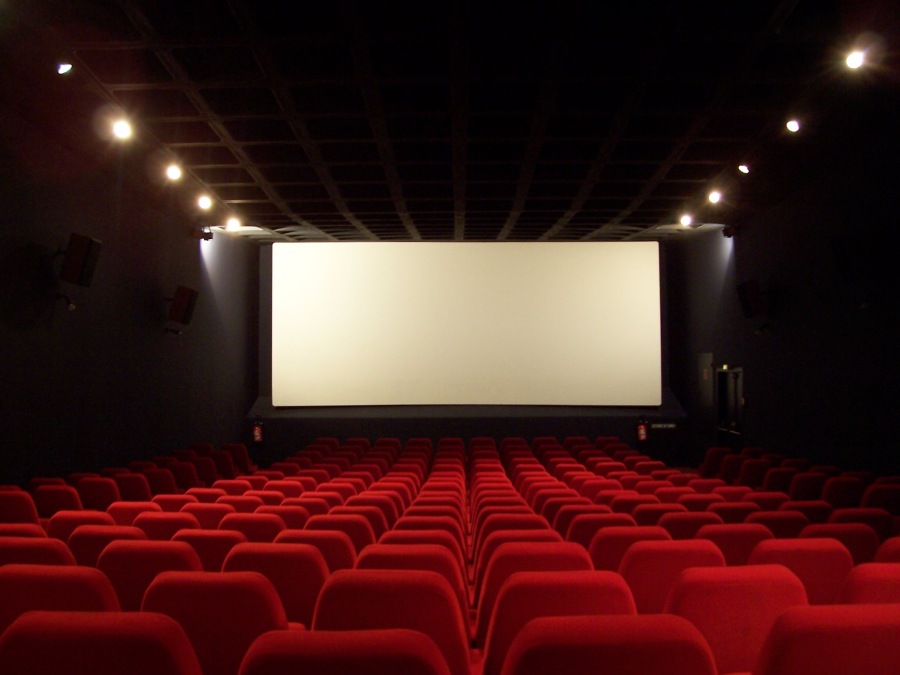 Okay, this one’s harder to define. A lot of the ones in this are very, very, good films. They just weren’t for me. They’re films which I admire, but don’t really feel anything for. Ones I’m very glad I’ve seen, but I don’t need to see again. As usual these have been decided by a group of people broken down by age and money (i.e. me, because nobody is more broken down by age and money than me)

It’s done by the guys who do Wallace And Gromit, so you know it’s going to be enjoyable. The jokes are funny, but the basic plot and mediocre vocal performances let it down slightly. But I imagine kids won’t be sitting there watching it saying “well I’ve seen this story before and personally I think it was a mistake to cast famous actors in vocal performances and then get them to change their voices, very foolish from a marketing perspective”, and if a kid is sitting there saying that, they’re a twat.

+A lot of love went into this film, you can tell it.

-Isn’t quite as smart as Aardmans usual.

This was funny, it just didn’t mean enough. I watched it, and not too long ago, but I barely remember anything from it. I remember enjoying it whilst I watched it, and some of the jokes, but I don’t remember if it made me feel. I remember being impressed with how the director kept on scenes instead of cutting away, it wrung every inch of effectiveness out of the scenes. It also had great things to say about how you shouldn’t hold your heroes up on a pedestal, and it’s possible to do good and still be a dick.

-Really hard to imagine it being a film someone needed to make.

Incredibly charming. But even if it’s the first film you’ve ever seen, you will feel like you’ve seen it before. It’s not a film you need to see, but when you’ve got family round on Christmas day, dinner is finished and you’re sitting around too full of food to move, no more presents to open, THIS is the film you want to put on to keep everyone entertained. People won’t love it, but people won’t hate it either. They’ll sit and watch and be entertained.

+Great characterisation, you genuinely believe everybody here is a fully developed person.

Thoroughly okay. It’s not as good as the first one, but you wouldn’t expect it to be. But it is still a lot of fun. It continues the universe set up in the first one quite well, and sets up for a sequel.  I hope, if there’s no sequel then the mark for this gets reduced drastically (this won’t be the last time the mark for a film will be dependent on the sequel btw, just to warn you). It’s funny, the characters are likeable, and it’s hard to dislike. Also, it’s short. It never pauses for breath and you don’t feel bored with it *stares at Assassination Nation intently*

-Doesn’t live up to its own potential.

The House With A Clock In Its Walls

Not as good as the first Goosebumps, not even as good as the second one if I’m honest. It is kind of magical though. If I saw this as a kid I’d probably have loved it. It just didn’t really do much for me as an adult. A lot of the plot developments were dependent on characters being stupid. Which is a shame as the dialogue is not stupid, even though it is a kids film, you don’t feel insulted when you watch it as an adult, the jokes still work. It also looks great, but considering the director that’s to be expected.

+A great film if you’re looking to introduce kids to horror.

-Not great if you’re not a kid and have seen a lot of films before.

This is exactly what I expected it to be. It’s not the greatest film in the world, but it’s entertaining enough and gets the job done. It’s like the cinematic equivalent of a burger king. In the realm of dumb entertainment this is one of the best efforts. It’s funny, the romance sub-plot doesn’t feel forced or unbelievable, the child actor wasn’t annoying, Ruby Rose was great, and it was just insane fun. Recommended, but not highly.

-Should have had more carnage. Was really held back by its rating.

This is the kind of film which awards love, yet I didn’t. It’s just too, I don’t know, bland. There’s a definitive difference between films that win awards, and films that I love. It builds up to the Meryl Streep moment well, and the performances are fine. It just felt a little hollow to me and didn’t resonate with me on a personal level. I genuinely can’t remember a single moment from this film.

I liked this, it was incredibly fun, and funny. But that’s all it was. it had little to no actual substance to it. Also, like a few films lately, it was held back by the rating. It has explosions instead of swear words. Because death and destruction is fine, but heaven help us we hear a “fuck”.

See my review of Rampage? I mean, how can you not, it’s like, right above this one. Yeah, this is similar, and not just because it has the rock in it. It’s also incredibly flat with little substance. It has moments of greatness, but it’s so bombastic that it’s hard to take seriously at times.

+Has a great scene set in a mirror room. Truly awesome to watch.

Funny, but again, that’s kind of all it is. It has emotional moments but not enough. I knew nothing about it going in, didn’t even see a trailer. It’s worth watching, but don’t go out of your way to see it. Luckily you don’t need to as it’s on netflix (in the UK at least). It’s well worth watching it on that when you have nothing else to do. It’s a great way to kill time, but it won’t change your life.

The best of the video game films this year. Definitely has the substance which Rampage lacks. Looks professional, to the point where you wouldn’t know it was a video game, it stands up on its own merits. This is probably the best of the films in this blog, and very nearly made it into the next blog instead. The main thing that stopped it was the fact that it is only ever “good”. It never goes beyond “good”. And it doesn’t seem to try. I mean, it is the best video game movie seen in a long time, but that’s not saying much.

-At times a bit hard to suspend your disbelief.

The gimmick of this film is that it was shot on an iphone. You really should know this before you see it, otherwise you’d hate it as you’d think it looks incredibly cheap and slipshod. It’s worth a watch, even if only once to reward experimentation in cinema. The performances are good, Juno Temple shines in the small moments she’s allowed to. And the story is compelling, it’s just the visual nature of it is distracting. Cinema is expensive, so when you pay that much you expect a certain level of professionalism. If this was on netflix I’d be more forgiving, but full price cinema release makes me feel a little cheated.

Very funny. Very British. Both in a good and a bad way. It seems like it should be on ITV. It promoted itself as a love letter to British wrestling, but it didn’t seem to do any research on it and was seemingly written by people who knew nothing about the actual subject. To the point where the actual central premise doesn’t work if you know anything about the subject. British wrestling is actually in the best shape it’s been since it’s heyday, this is not opinion, this is fact. There are multiple independents doing incredibly well, and one of the major companies opened up a regional training facility and show over here. If you know that, it’s weird to take the film seriously. It would be like if you watched a film about World War 2 where the central premise is that Hitler was a Ghanian princess who was trying to get revenge on Britain for colonialism.

+A variety of humour types in the film, so if you don’t like one joke, another will come along soon which you might. 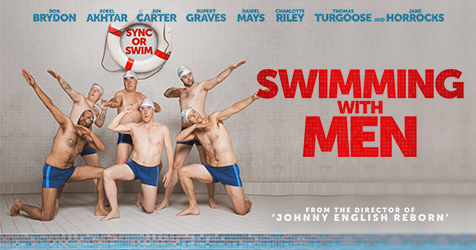 Yet again, a film which I knew absolutely nothing about. It is weird how I can see so many films at the cinema (37 so far this year) and yet there’s still a lot of films where I don’t see the trailer beforehand (11 so far I’ve gone into blind), it doesn’t say much for film marketing really does it? So, this film, it’s about someone who goes swimming, with men (oh my science that’s why it’s called that! That’s SO clever). It’s based on a true story about a group of middle-aged Swedish men who started a swim team. In a nice touch, they’re in the film, playing a Swedish swim team who in everything. I like that.

Of course it’s a low budget British film; but it’s very different from a lot of films like that. For starters, this isn’t about a group of elderly British people doing things, this is completely different; it’s about a group of middle-aged British people doing things.  There’s no way a major American company would finance this, and for good reason; a lot of people won’t like this. Some of the dialogue is quite bad, almost none of the actors will be known outside of this country, and it’s so slow paced it’s almost glacial. Plus, it’s a film about synchronised swimming, which isn’t exactly a major source of excitement for casual moviegoers (although it does provide some spectacular cinematography).

If you’re unsure about whether to watch it, the opening won’t change your mind. It’s a typical “middle-aged person is bored and thinks his wife is cheating on him” that you’ve seen MULTIPLE times before. Actually, there’s not much in here you haven’t seen before, outside of the swimming sections. But that’s where it shines. The swimmers are people who come together to escape their mundane lives, they don’t give any details of their private lives to each other, they just use it as an outlet for frustrations through teamwork and bonding. It’s actually a lot sweeter than I’m making it sound. It would be even sweeter if the film was a bit longer. If it was longer it would give some of the other characters more to do, as it is there are a few members of the team who you completely forget about, one of them is someone who never speaks, he speaks finally near the end in what is supposed to be a big moment, but in reality you’d have barely noticed him in the film and will completely forget about that being his character trait. This does make it sound like I disliked it, that’s wrong though. It was funny, incredibly heartwarming, and the characters that we did focus on were really well written in terms of their interactions with each other.

It’s also incredibly funny at times. But in a believable way. There was a lot of opportunities for silly slapstick but it admirably never takes them, instead going for character-based jokes and dialogue. Still not enough to forgive the criminal misuse of Jane Horrocks though.

I’d suggest seeing it if you can get in cheaply, otherwise, I’d wait for it to inevitably be on BBC over Christmas, and then watch it then.