Roald Dahl may have hated almost every film that was made of one of his books, but to me, they usually work pretty well. Willy Wonka will always have a special place in my heart (mainly because of Gene Wilder), and The BFG last year was so good it was described as

“fairy lights and sunshine on celluloid”

by someone incredibly important and intelligent (yeah, it was me). Am I missing any out?

Oh yeah, that one. So whilst Dahl hates them, films of his work are generally loved by people. That’s down to the worlds he creates, the fact he writes FANTASTIC child characters, and of course, the stories. With a lot of children’s books, you look at them as “books for children”, books which are fine if you’re young, but lose their magic as you get older. And the ones that don’t suffer from another problem; you can easily see their influences. You can read them and think “oh, the author obviously has read x before”. These don’t, they’re unique stories, wonderfully told, that’s why the films work.

Well, I saw “quite”, it features a scene where the main villain changes a small child into a mouse. It’s not instantaneous, it’s like you can feel it happening to you, you can tell it’s not painless. It also features a scene where the villain tries to push a baby off a cliff. I love kids films like this, ones which you watch them as an adult and think “why did we let kids watch this?”. It’s kind of basically a kids horror movie (much like Goosebumps, which I still recommend everyone go see). I mean, the opening features a child being cursed so they disappear into a painting. That’s not a kids movie, that’s a fucking Twilight Zone episode.

Okay, the kids acting isn’t exactly good, but the adults are. Jane Horrocks is lovely and her silent disgust is evident throughout, Rowan Atkinson is good with the small amount he’s given. My favourite though is Mai Zetterling. This was one of her final films and she really shines, it makes me sad she wasn’t in more things. She’d have been perfect as Aunt May in a John Hughes made Spiderman movie in the 80’s (what a good idea for a blog that would be, that’s foreshadowing). 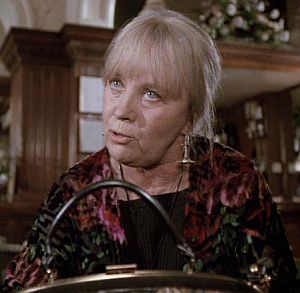 This film is hers. She doesn’t so much chew the scenery, as cut it into small manageable pieces and delicately nibble on it. She plays such an evil character with so much poise and sophistication (so much so that she doesn’t seem to walk, but glide) that she almost becomes likeable. I think she may be one of my favourite actresses, when she’s good she’s REALLY good. There’s this, The Addams Family, and 50/50, and I’m sure there are many others which I’ve yet to watch. She’s one of the few actresses I’d really love to be able to meet and just talk about her films with her.

Usually, I’d be set against this, but apparently, if it gets made it will be done by Alfonso Cuarón and Guillermo del Toro, with Jennifer Lopez as the main witch. I want that so much. And now I’ll end this the same way I end every day; with casual attempted infanticide.