This film is deeply flawed. Features a character who is constantly getting phone calls from someone, and she never thinks to block the number. And when she tells the police she’s being stalked by someone, they point out it’s perfectly legal to stand in the street outside a restaurant where she works as it’s public property. One, this seems wrong, and I really hope it is, if that’s true then the world is a terrible place (but, restraining orders do exist, right?). But also, that time would have been a good point to mention to the police all the bags she found at the woman’s house, all with names on which if investigated would have been discovered to have belonged to missing people. That lone would have been enough to warrant an investigation. Also, we later find out that she’s not supposed to be in the country due to medical abuse, the police would definitely have discovered that and acted on it, thus stopping the entire plot. It’s an issue when a film is based on a kind of flawed premise. But you know what? I didn’t care, I really liked this film.

I knew nothing about this film going in. Well, I knew kind of what it was about, and one of the people in it. Other than that, nothing, I went in with no preconceptions. I think that was a good thing, I didn’t go in expecting tenseness from the off. Although I’m not sure that would have mattered because this started relatively quickly. Don’t get me wrong, the story itself was still slow moving, but it kicked off almost immediately. Now when I say it was slow, I mean it. The plot was almost glacial but in a good way. Like it was slow moving, but it was always moving forward. There wasn’t much time wasted, which was nice. What wasn’t nice was this film, there’s one moment involving a cookie cutter which I’m not sure I’ll ever be able to forget, was one hell of a scene that woke the audience up. But even before that the film has a great sense of tension that never lets up, you’re on tenterhooks for almost the entire time and it’s brilliant. Yes, there’s a twist near the end which is way too obvious to really be counted as a twist, but it’s enjoyable nonetheless. There’s also a great moment of realisation for the audience. If you want to avoid spoilers, stop reading now as I have to spoil it. There’s a moment early on in the film where there’s a loud banging behind a wall, Greta (the kind of evil woman in this) explains it’s just builders next door, and she bangs on the wall to shut them up. Later on in the film Chloe Grace Moretz’s character is behind that wall and starts banging on it, and we realise, as an audience, what exactly was happening earlier. When Greta was planning to kidnap Moretz’s character, she already had a victim in the house who was listening to the whole thing but unable to do anything to stop it. Imagine that from her point of view, terrifying. That moment is just subtle enough to work, and it’s glorious.

Know what else is glorious? Isabelle Huppert, I haven’t seen her in anything before but she’d make a great Bond villain. Actually, she’d be great in a horror film too. I cannot praise her performance enough. The film is almost worth seeing based on it alone, but you should go see it anyway.

Confession time: I actually liked this film. Okay, the “romance” moments were really bad but the rest of the film was good. The destruction scenes were very well done and really showcased the horror that’s going on. There’s very little “implied” deaths here, they’re shown, and shown in detail. For example; during a scene where an earthquake induced tsunami where the wave washes through a building, rather than just show it from the outside, or show people getting knocked down, the wave actually knocks someone off a balcony and they land (painfully) on a rail below. The plot itself was really tight as well, it held together beautifully and I’m genuinely invested in the characters and want to see what happens next. 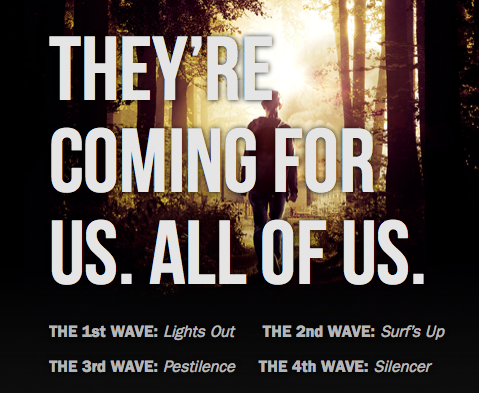 Which makes it even sadder that it’s not doing well at the box office. It’s just about managed to claw back its budget in the US and considering it was only out in a lot of UK cinemas for a week it doesn’t look like it’s going to do too well here. So why is this? It’s got a semi-established name in Chloe Grace Moretz, Liev Schreiber is usually pretty solid, and you’d think people would be interested in what Maika Monroe does after It Follows.

I think the big problem is the marketing, in that there really wasn’t any. I haven’t seen any posters for it anywhere, nor any trailers, which considering how often I go to the cinema (thank you Cineworld card) isn’t a good sign. I’ve seen the trailers for Spotlight, Concussion and Dirty Grandpa so often that I can probably quote them word for word.

So how would I have marketed it? Well, I would have made sure trailers were actually shown at cinema for one thing, if it wasn’t for checking the listings at cineworld website I wouldn’t have had any idea this was even on. Also, I would have done a 5 part video game. I’m not talking an extremely complex XBone or PS4 game or something, just a simple online game made of 4 parts, all based on old video games. One could be like a space invaders clone, one could be one where you have to go around shutting off all the electricity towards the building. You stagger the releases and on the final one you reveal that you are actually aliens invading humanity and causing their doom.

I admit that’s not the most definite way, there’s no way it will guarantee success but at least you’ll be trying. Their entire marketing section on wikipedia is “An international trailer was released on Sony Pictures official youtube account on September 1, 2015”. I just went on the website and it’s pretty standard; cast and crew, videos, gallery etc. But there’s one section labelled “defining the waves”. I saw that and thought “ah, this could be good, maybe it provides a lot of background detail or is some kind of viral marketing campaign. Maybe I was wrong. Nope, it’s literally just a sentence describing each wave of attack. As I used to say whenever I was playing someone on Fifa and they messed up; Wasted opportunity there.