It’s coming up to a week since the terrible attacks in Paris and the world is still struggling in the confusing aftermath, uncertain of what to say or do. This tragedy is a bit unlike 7/7 and 9/11 though. Maybe it’s because unlike the other two events, this one happened in front of us. It seemed to unfold, not just on national news, but on social media. As it happened people were tweeting about it, facebooking about it etc, letting the world know what was going on as it happened. The world became spectators to a game that they never wanted to see in the first place. Also different are the reactions. Outside of a few people most of the messages are ones of hope. Messages that France, and the world, will get through this. Twitter was overloaded with messages of support, not just for the victims and their families, but also for any innocent Muslims who might end up getting attacked as a reaction to this. The general feeling of this attack isn’t “kill all Muslims” (apart from Trump, who said they should be made to wear identifying badges, in a move that makes it hard not invoke Nazi analogies), instead, the feeling is “Fuck ISIS”. It’s progress. So why is this? I have a theory:

One of the explosions occurred during a internationally televised football match, and if it wasn’t for the actions of a security guard at the gates of the stadium, it would have been a lot worse. But through doing this, he denied the Assholes an important opportunity (side note: editorial guidelines for this blog dictate we don’t call them “terrorists” as that gives them power over our fear, they don’t deserve that, instead we will just continue to refer to them in whichever capitalised insult springs to mind. We are a media blog, so I doubt this will happen that often). Through this man doing this, it meant there wasn’t a defining image of the attacks. 9/11 had the smouldering towers as well as the man jumping from them, 7/7 had the masked woman being led away from the blast. These images fuelled a lot of intense arguments and hatred, and the Paris attacks lacked that visceral image. In years to come the images we will associate with these attacks will be national landmarks draped in the colours of the French flag. Never deny the important of an image.

But why this film specifically? Why not Two Days, One Night? Why not the absolute sublime Belleville Rendez-vous, especially in light of Chomet’s brilliant couch gag for The Simpsons. The reason is simple: this film is simply beautiful. Watching this film is like eating a box of Guylian chocolate and feeling it melt in your mouth. It’s not just a story, it’s an experience. It’s something that makes you feel warm inside. But that may just be the whimsical nature of it. It’s one of the most hopeful films you could hope to see, about decency, about the positive side of human nature, about convincing someone to travel by stealing their gnome and getting people to take pictures of it all around the world. 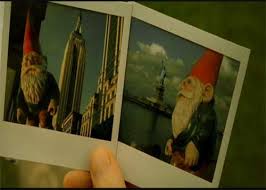 It’s this sort of whimsy and loveliness that we need to showcase right now. Just as the characters of Amelie needed her, we need this film. We need, well, I think Maximilien Robespierre said it best: